Kindred Spirits was commissioned by the merchant-collector Jonathan Sturges as a gift for William Cullen Bryant in gratitude for the nature poet’s moving eulogy to Thomas Cole, who had died suddenly in early 1848. Durand marshaled his skills as draftsman, genre painter, portraitist, and landscape painter to create a remarkable image. He memorialized Cole, who had been his own mentor, forever standing in a deep Catskill gorge, sketch portfolio in one hand and his recorder in the other, in company with their mutual friend Bryant.

The botanical precision of the mountain forest and foreground trees marks the new direction toward realism in Durand’s work. The gorge and the torrent embody geological process as well as sublime grandeur. The two figures might as easily be discussing their mutual fascination with the science of geology as meditating on the Romantic sonnet by John Keats for which the painting is named.

AI Magazine is published by the American Association for Artificial Intelligence (AAAI).

This paper discusses the use of fast (60 frames per second) object tracking using the Cognachrome Vision System, produced by Newton Research Labs. The authors embedded the vision system in a small robot base to tie for first place in the Clean Up the Tennis Court event at the 1996 Annual AAAI Mobile Robot Competition and Exhibition, held as part of the Thirteenth National Conference on Artificial Intelligence. Of particular interest is that the authors’ entry was the only robot capable of using a gripper to capture and pick up the motorized, randomly moving squiggle ball. Other examples of robotic systems using fast vision tracking are also presented, such as a robot arm capable of catching thrown objects and the soccer-playing robot team that won the 1996 Micro Robot World Cup Soccer Tournament in Taejon, Korea.

In many applications, the Cognachrome Vision System outputs its tracking data to another CPU. However, for this robot, we decided to interface the robot sensors and actuators to spare I/O on the vision board, and to write our control software on the vision board itself. We wrote a fairly simple, reactive controller for our robot.

With the hard part (the vision tracking) already taken care of by the vision system’s built-in functions, we spent several weeks (including a few days at the last minute at AAAI) writing and testing a simple, reactive control system.

Each state had several sub-states, as shown in the diagram below:

Approach ball is active when a ball is seen in the “Find and Approach Ball” state, and that ball isn’t already within gripper grasping range. If more than one ball is seen, the closest ball is generally chosen, with some hysteresis to prevent oscillation between two balls of similar distance.

M1 must approach a ball in such a way that it enters the gripper area from the front. If the ball is directly to the left or right of the gripper, M1 will back up until the ball has cleared the gripper’s side. Otherwise, M1 approaches the ball with a simple feedback loop:

Set M1’s rotational velocity to be proportional to the angle required to bring the ball directly in front of M1.

If the ball is “close enough” to being directly in front of M1, move forward with a velocity inversely proportional to some function of the angle error.

While the “Follow Wall” sub-state in the “Find and Approach Ball” state is active, M1 will stop and pivot back and forth at a certain period. (During the first half of the contest, M1 pivots every 12 seconds, and during the second half, M1 pivots every 6 seconds.) The purpose of the wall follow is to help guarantee that the entire region will be searched. However, in larger rooms, following the wall isn’t adequate to search the entire room. The pivot behavior forces M1 to look towards the center of the room every so often, extending the distance from the wall at which balls can be seen.

Although it isn’t shown in the diagram, each of the four states has special timeouts to attempt to detect if the robot isn’t making progress. In this case, the robot might stop and then start again (in case a stepper motor had stalled), or might back up (in case the robot had somehow gotten itself into a tangle of some sort).

M1 uses the vision system to detect balls on the floor and to detect the blue marking on the gate. Given the location of a ball in the field of view, and assuming that the ball is on the floor, M1 can compute the position of the ball relative to the robot.

M1 uses a fairly wide-angle lens (about 90 degrees). Such a lens results in a pronounced fisheye effect. Typically, we make the simplifying assumption that the (x,y) coordinates returned from the vision system map linearly onto a virtual plane which is perpendicular to the axis of the camera. However, for this application we decided we needed more accuracy. (Given that we find ball positions by computing the intersection of the floor with a line from the camera, and given that the camera is fairly close to the floor, small angle errors can lead to large position errors.)

Therefore, we needed to calibrate the camera. That is, we wanted a function which takes (x,y) coordinates from the vision system, and returns coordinates in a physical coordinate system we could deal with. (We actually use spherical coordinates rather than planar.) We started to deduce the proper mathematical form of the function describing this mapping for the particular wide-angle lens we used, but found it was easier (and accurate) to just use least-squares fits to create two bivariate quadratics (where the variables are the x and y coordinates), one for the horizontal angle and one for the vertical angle.

To generate the calibration data for the least-squares fit, we set up a vision target a distance away from the robot. We then had the robot pivot from side to side and rotate the camera up and down in a predefined grid pattern, recording the (x,y) coordinates of the target given by the vision system at each step. (The target was far enough away to allow the simplifying assumption that the camera did not change position, only orientation, despite the fact the camera was not on the robot’s pivoting axis.)

This method of gathering the data worked well because of our precise control of the robot’s position and camera angle (made possible in part by using stepper motors).

M1 uses stepper motors to drive its wheels. One problem with stepper motors is that if you try to run them past their limits (run them too fast, or accelerate or decelerate too quickly), they will stall. M1 has no stall-detection sensors. M1 does have stall-recovery behaviors in place (i.e., if the control software decides that no progress has been made for long enough, it will slow to a stop, which recovers from the stall), but it is much better to avoid stalls in the first place.

3. Other Applications for Fast Vision Tracking

Making a winning entry for the AAAI Clean up the Tennis Court contest was made much easier by having a vision system capable of quickly tracking targets of interest. The authors believe that fast vision tracking has the potential to help many other applications as well. Included here are an assortment of projects for which the Cognachrome Vision System is currently used.

Two Cognachrome Vision Systems were integrated in the new version of the adaptive robot catching project led by Prof. Jean-Jacques Slotine of MIT. The project uses an advanced manipulator and fast-eye gimbals developed under Dr. Kenneth Salisbury of the MIT AI lab.

Using two-dimensional stereo data from a pair of Cognachrome Vision Systems, they predict the three-dimensional trajectory of an object in flight, and control their fast robot arm (the Whole Arm Manipulator, or WAM) to intercept and grasp the object. (Please see http://www.ai.mit.edu for more information, and animations of the arm catching various objects).

Performance artist and roboticist Barry Werger creates performance robotics pieces using Pioneer mobile robots equipped with the Cognachrome Vision System. By providing the robot and human players with appropriately colored tags, the robots can interact with each other, and humans, at a distance in a theatrically interesting way. Please see http://www.cs.brandeis.edu/~barry/performance.html for more information (including information about future performances.)

Maja Mataric, Barry Werger, Dani Goldberg, and Francois Michaud at the Volen Center for Complex Systems at Brandeis University study group behavior and social interaction of robots. Along with other robots, they use Pioneer mobile robots outfitted with Cognachrome Vision Systems.

In conjunction with shorter range or less specific sensors, such as sonar, the Pioneers use color-based tracking to help recognize other robots, obstacles, and goals.

“I have combined these two [vision-based long-range obstacle avoidance and vision-based following of intermittently blocked objects] to address some of the problems we have in our mixed robot environment… that is, the Pioneers are faster and bigger than our other, more fragile robots; the long range avoidance allows them to keep a safe distance from other robots, even in fairly dynamic environments, when following a dynamic target. The vision allows us to make these distinctions very easily, which the sonar does not.”

Figure 11. The target is composed of three parts: “L”, “C”, and “R” (left, center, and right). “X” is the position of the camera. Note that q is measured in the plane of LRX, not LRC. Adapted from David P. Miller and Anne Wright. Autonomous Spacecraft Docking Using Multi-Color Targets. In Proceedings of the 6th Topical Meeting on Robotics, Monterey, CA, February 1995.

The authors have found through the AAAI contest, as well as many other applications, that a fast vision tracking system can be a useful sensor for robotic systems. For this particular contest, fast vision tracking worked especially well. The data from the vision system were appropriate to the problem at hand, and allowed us to use a simple reactive system for control. The vision system’s fast update rate was crucial in being able to follow and catch the squiggle ball.

We look forward to future opportunities to apply fast vision tracking to other problems. 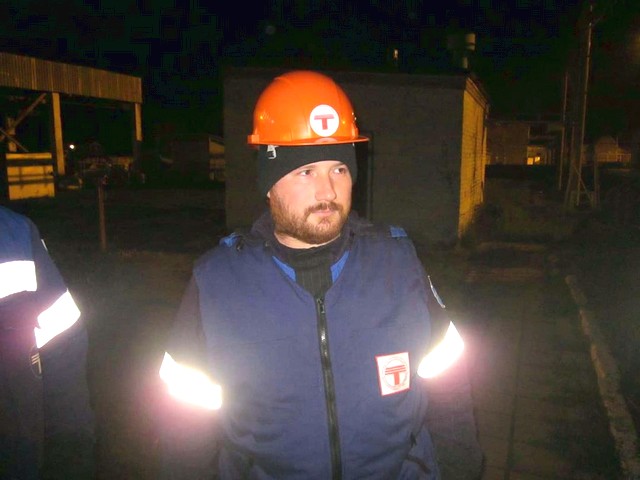 Newton Research Labs is the proud winner of the first International Micro Robot World Cup Soccer Tournament (MIROSOT) held by KAIST in Taejon, Korea, in November of 1996. We used our Cognachrome Vision System to track our three robots (position and orientation), the soccer ball, and the three opposing robots. The 60 Hertz update rate from the vision system was instrumental in our success; other teams obtained robot and ball position data in the 2 to 10 Hertz range.

The contest attracted worldwide press coverage, including coverage from CNN.

Because of the small size of the robots (each fit into a cube 7.5cm on a side), we opted for a single vision system connected to a camera facing down on the field, instead of a vision system in each robot.

If you are interested in learning more about the technical details of our entry, please send mail to vision@newtonlabs.com. We are currently writing a paper that describes our soccer-playing team in detail, and we are happy to provide (unsupported!) source code for our winning entry to anyone who asks.

Find out more about Newton Labs’ Cognachrome Vision System, including technical specifications, some cool applications, and other contests we and others have won using our vision system.